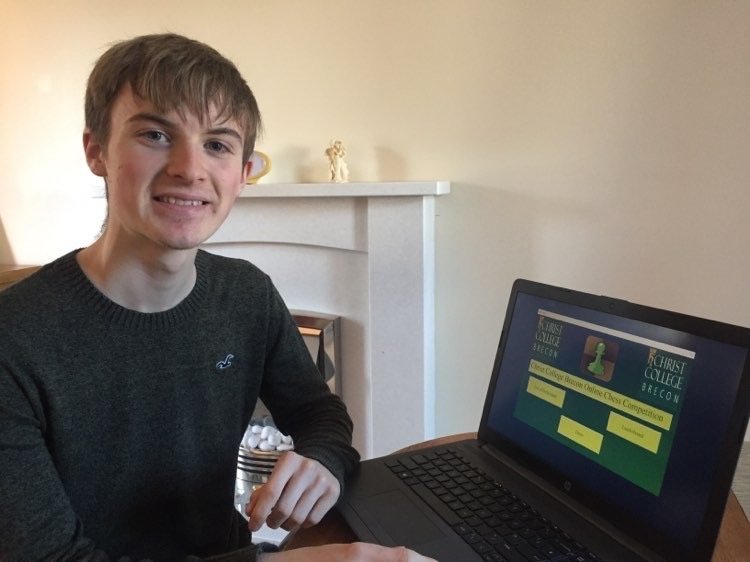 Over the last few weeks Christ College Brecon has participated in a Whole School Virtual Chess Competition, coordinated by Lower Sixth pupil, Ethan Reynolds. The competition has had lots of support and interest across the school with an amazing 30+ pupils and staff taking part, who have so far managed 4 rounds of matches. The recent involvement of our sister school, King Henry VIII College, Malaysia has led to a total of 42 players for now involved.Here, Ethan provides a report on the tournament so far.

Throughout the competition there has been a variety of changes in the positions. After the first round there was a win from Mr Thomas and Ellie W which gave them the first lead spot with the highest amount of points left on the board. Also, in the first round there were some very interesting matches with a close game between Mr McMillan and Mr Reeves with the former just edging it with a resignation from Mr Reeves.

For the second round there were more interesting games played. Peter P. had a close game with Daniel Mc making him fall from the leaderboard. There was also a loss from Rhodri J and a drop in points from Ellie Williams forcing them down the board making room for Mr Hill, Matthew P and Oliver O’B to move up into second, third and fourth respectively. However, with this new leaderboard Mr Thomas held his lead with another amazing win this time against Aidan H.

Going into the next round over Easter weekend Mr Thomas looked unstoppable. He had had 2 wins in a row and was miles ahead in points scored in both his games and going into a bonus round all he would need is a win to retain first place. However, after a long-fought battle with Mr Patterson he suffered a devastating loss which threw him all the way down to fourteenth place.

Also, in round three, there were lots of movement across the board with the increase in points at stake due to the Easter bonus round, Mr McMillan fought a hard battle with Matthew P to become the new leader with Ethan R close behind. There was also a very close game between Mr Hill and Peter P. battling for third place. This game was tough and eventually led to Peter P. being victorious and securing third place sending Mr Hill tumbling to fifteenth place behind Mr Thomas. Angelo D. made a huge leap to fourth place due to multiple losses from leading players. There was also a good game for Aidan H and Ellie W who managed to beat their opponents allowing them to move up to fourth and fifth threatening the new leaderboard.

Going into round four everything was in the balance after lots of top players were knocked from their positions after an interesting Easter weekend. This round led to another well earnt win from Mr McMillan during a close match against Ethan R. This allowed him to secure his first position with an additional fifteen points. Ethan was sent to third place with only thirteen points secured. Peter P. managed another win allowing him to move to second with fourteen points. This round saw a new entry to the leaderboard with Aidan H sneaking into fourth place.

After this round only Mr McMillan and Peter P. have managed to win all their games. Further down the field, away from the leaderboard, there was a tense battle for tenth place with Mr Thomas, Mr Hill, Mr Patterson and Mr Reeves all equal with ten points. Further down the field there has been excellent effort shown by Romilly M., the Rev and Izzy F who have played every game and keep going even though they are still yet to find a win. Well done to Mr Snarey for gaining his first win of the competition.

Going into round five, we were joined by KH8 in Malaysia who were very keen to join in and get involved. We now have 12 participants from King Henry VIII College – 2 teachers and 10 pupils. Round 5 will be an interesting round with some more great games being played. This round could see some interesting changes to the new leaderboard and maybe this could break Mr McMillan and Peter P’s winning streak. The leaderboard is expected to change with more bonus rounds planned and hopefully more participants joining. The next bonus round is planned to coincide during the week of May Bank Holiday with a VE day theme.