The Chapel Choir travelled to Malaysia at half term as the guests of our new sister school, King Henry VIII College. Having gathered at Christ College on the Monday, we made our way to Cardiff airport for our flight with Qatar airlines – all rather civilised when compared with our usual 2.30am departure to Heathrow for previous tours to Europe! The Qatar airlines service is excellent and we all enjoyed our journey via Doha, catching up on some half term sleep and a few good films. Several choristers proved that you could in fact watch 5 films back-to-back in the space of one journey.

At Kuala Lumpur, we were met at the airport by Director of Music Amy Whiterod and Director of Boarding Martin Knights, both kitted out in their smart KH8 PE kit. Travelling by coach to the school, we were immediately struck by how green everything was, evidence of frequent tropical storms, which we were soon to experience. KH8 is only a short distance from the airport and we were pleased not to have to sit for much longer.

Arriving at KH8 is an awesome experience with its imposing gates and monumental buildings. Founding Head Simon Spencer and his wife Felicity were there to greet us at the entrance. Taking us through to the main reception area at the foot of the central building that is so clearly modelled on our own Chapel (but about 3 times the size), we weren’t quite sure if we were being hosted by a school or a 5 star hotel!

We stayed in one section of a boarding house that had every facility and plenty of space. The girls were fortunate to be offered the senior dorms, which were twin rooms with en suite facilities and the boys slept in more junior rooms, sleeping 3 or 4 people in a cabin styles arrangement with desks under beds. Following a briefing on various points to do with the boarding house and some top tips for sleeping with air conditioning, we were taken to the local shopping area (Tamarind Square) by the GAP and Graduate student team. This first chance to explore the local area led us to discover an upright piano in a forecourt; Jonathan Cooper, Director of Choral Music, was easily tempted into leading us through a couple of songs which drew in a supportive local crowd, not used to hearing Calon Lan, or Locus Iste by Bruckner on a Tuesday evening at their local supermarket!

On the first morning, following a tour of the school and a special visit to the new and cavernous classroom of Mr Clive Thomas, former Physics teaching ‘legend’ at CCB. 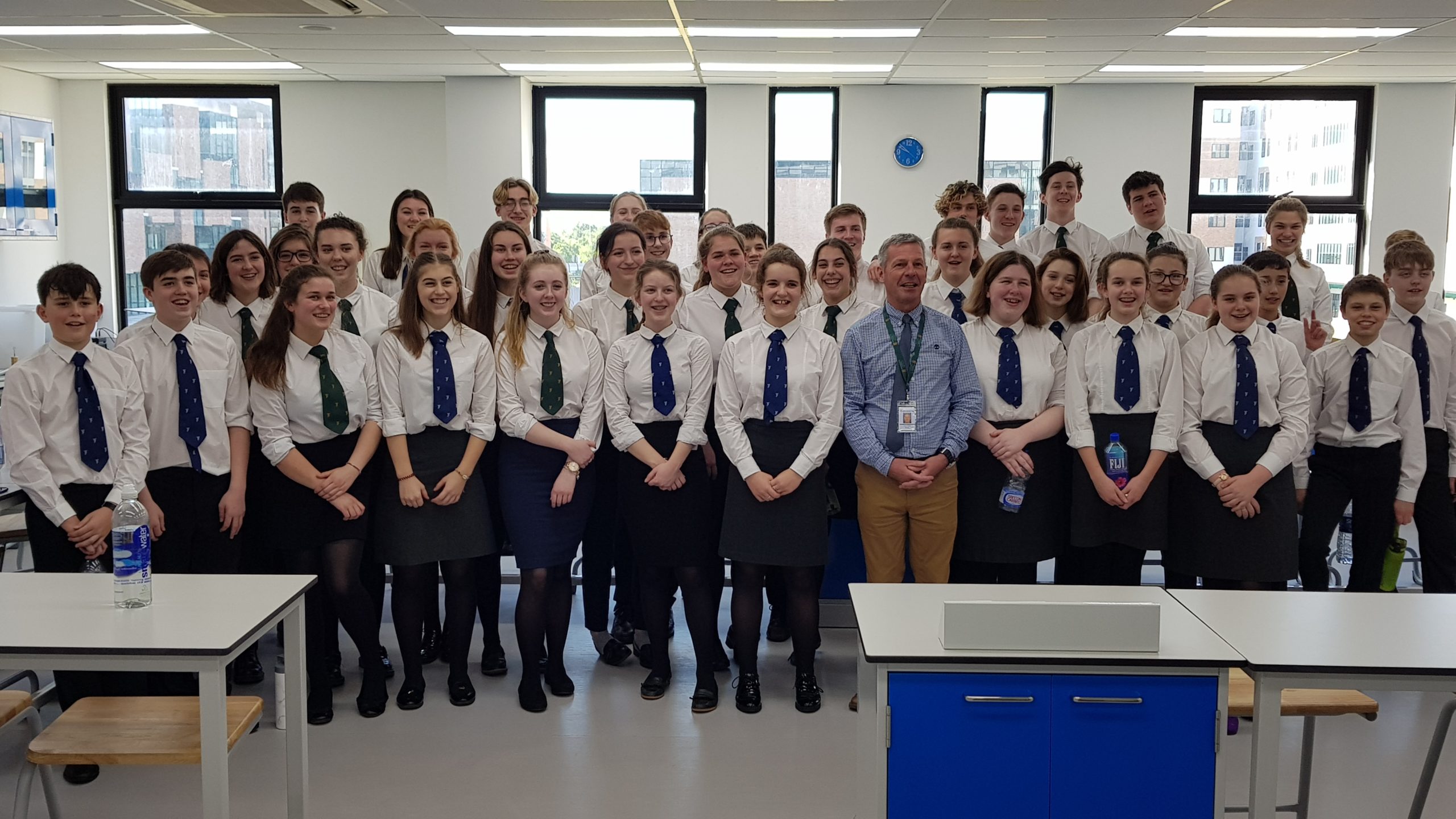 We sang for the opening of the very first Eisteddfod for the KH8 Junior School, which took place in the splendid new Recital Hall on the top floor of the main building. It is clear that the Junior School is already busy and thriving and the children were excited about their day of competition, all decked out in their house colours. As well as several choral items, Taliesin Eastwood performed When Somebody Loved Me from the film Toy Story, to great acclaim. Following this, we received a cultural briefing from some of the local teachers on religious and cultural customs as well as important information about the culinary delights that Malaysia has to offer. After lunch, a significant combined rehearsal took place between the Chamber Choirs of the two schools and we rehearsed a new school song, composed by Michael Dyer and Simon Spencer, to be performed at the formal concert on our final evening. With the musical elements completed, it was then off to Kuala Lumpur for some shopping at Central Market and then on to the base of the Petronas Towers and the lit fountain show that takes place there under the stars each evening.

Starting to feel quite at home now, the second full morning had us travelling to a local mosque at Putrajaya, where many of the government offices are located and we were back at school in time to sing for our lunch with some pop-up songs from the dining hall gallery. 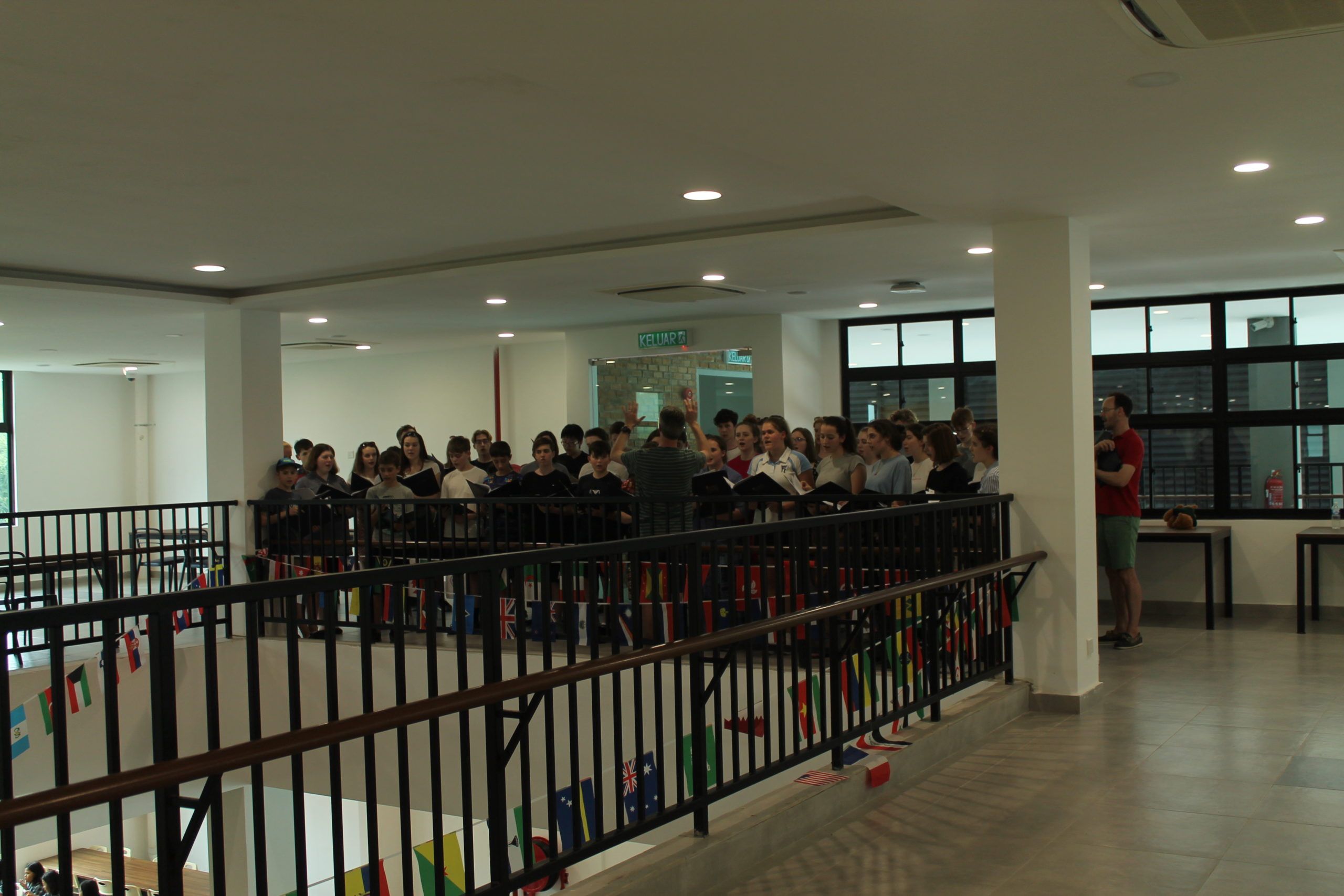 We performed twice, for both junior and then senior sittings; needless to say the junior lunch recital was accompanied by the obligatory tray dropping exercises and extra excitement from the KH8 children! We then departed for the delights of the enormous IOI City Mall, with a seemingly unending supply of high-end retailers, mostly out of the budget of our party, however, we were soon introduced to the more interesting and local delights of Jalan Alor, a street lined with a multitude of food outlets that catered for every taste. With its lively and authentic atmosphere, this was a cultural highlight for many. 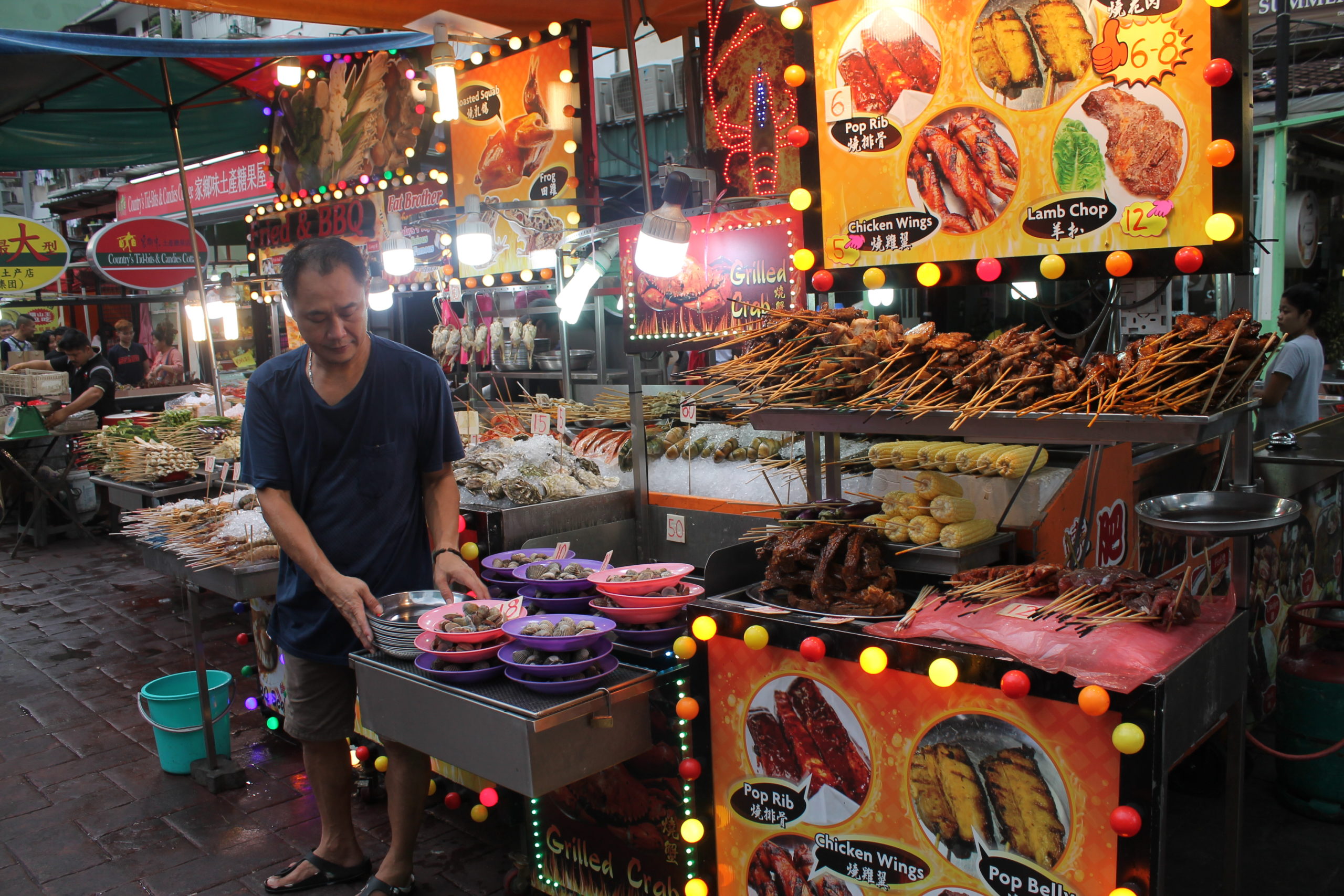 Friday was our final day in Malaysia. It started with a visit to the extraordinary Batu Caves, a place of significance for many Hindus, and also a place where naughty monkeys try to steal your food, water, glasses and mobile phones! A hot climb up 272 steps leads to huge caves containing Hindu shrines – a sight not to be forgotten. 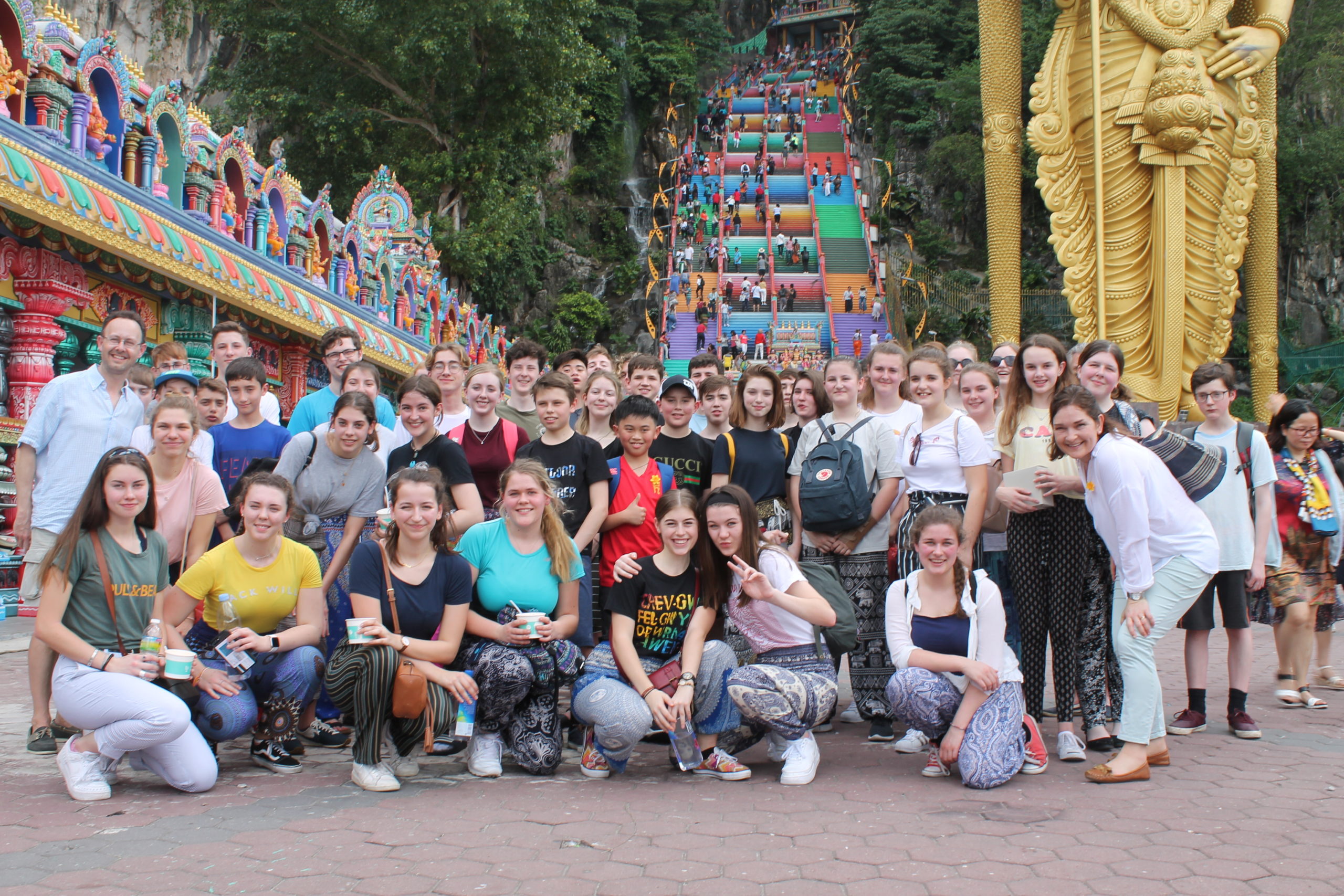 Back in school in the afternoon, we performed in the main Reception area (the size of a large Chapel) for parents at pick-up time (with a delightful unaccompanied solo from Eleanor Williams) and then rehearsed for our formal concert, which was given to invited guests in the evening. Several solo items from Alfie Jones, Ben Masters, Harry Jones, Martha Skibniewski-Woods and Zoe Solomon interspersed the choral items; it was particularly memorable as the first time that musicians from both schools were given the opportunity to perform together. Let us hope the this will happen again over many years to come.

Our return flight from Kuala Lumpur departed at 2.15am the following day and by this point we were ready to sleep again. It had been the most meaningful and uplifting experience, to be so far across the world making new friends and reuniting with former colleagues, and yet so connected to our world here in Brecon at Christ College. Such is the power of music of course that it transcends all barriers and brings people together, wherever they are in the world. We thank all the staff and pupils who looked after us during our stay, and in particular Datuk Benny Hoe, without whom our trip, and indeed King Henry VIII College, would not have come to fruition.