Gareth Pearson, Christ College Brecon Head, welcomed the many guests and supporters of Des’ Pen y Fan 365 challenge and expressed how proud the school was of ex –Christ College pupil, Des’ achievement which raised in excess of £60,000 for the two charities. 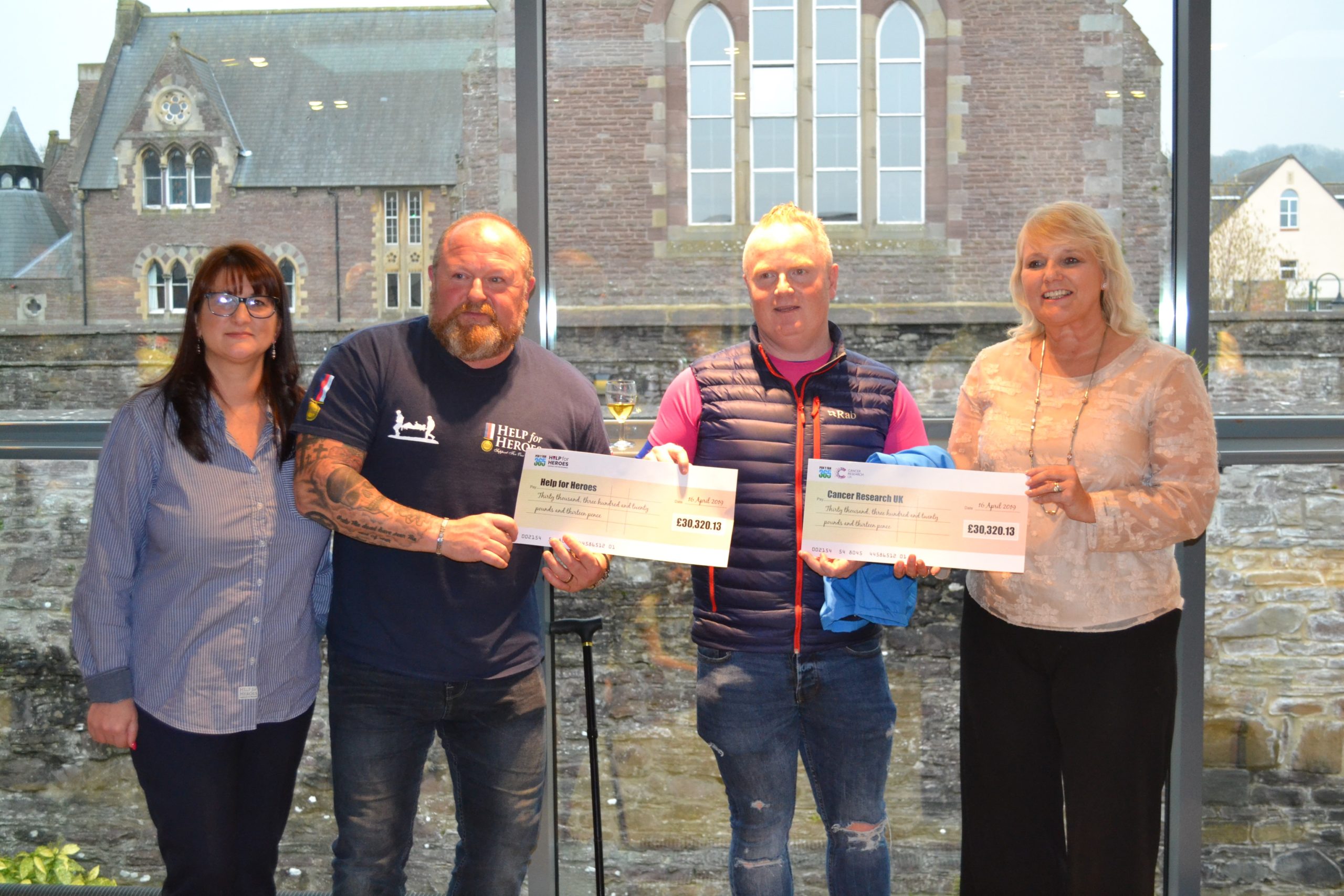 Martin Like, Likes of Brecon, gave the vote of thanks to Des on behalf of the Brecon community and expressed his awe at how resilient and mentally strong Des has had to be to complete such a physical challenge which many doubted was possible.

Present to accept the cheque on behalf of Help for Heroes was Shelley Elgin, Community Recovery Manager and Jim Whitworth, a Veteran who shared with the audience how he had benefitted from the support structures available to veterans via Help for Heroes.

Lynne Eagles, Senior Local Fundraising Manager accepted the cheque on behalf of Cancer Research UK and delighted the guests with a ‘Ditty for Des’, a fitting acknowledgement of what a super hero Des has been in successfully completing this challenge.

A Ditty for Des

Cancer know no boundaries, colour, creed or clan, affecting 1 in 2 of us, a woman or a man,
A child, a Mother, Husband, Brother, Father, Sister, Spouse, Cancer it’s a scary word in every person’s house.
Research – it kills cancer, it helps people stay alive, more birthdays, time with loved ones, living well to grow and thrive,
It’s really quite expensive and the only way it works, is from our unique supporters, raising funds with very many quirks.
From Marathons with fridges on your back, or getting Pretty Muddy, Three Peaks Challenges and coastal walking with a buddy,
The Great Divide – that’s biking all across a foreign land, rowing the Atlantic, Dinner parties so well planned,
Collecting with a bucket at a favourite Superstore – Bark For Life – a walk with four legged friends who we all so adore…..
Raising funds in many different ways in the UK, most things done in several hours or even just a day,
Sometimes it takes longer but last year in early Spring, Des Lally just decided Pen y fan was just the thing,
Climbing up the highest peak that South Wales has to offer to swell the funds that kill research in CRUK’s coffers
This mountain is for many nice to climb on Summer Days, but Des has climbed in snow and gales and many a heat haze.
Every day, and sometimes more he’s donned his boots or trainers and his jacket, and climbed his little heart out and quite frankly raised a packet!
For Help For Heroes and to help us fight back against cancer, to fund more life-saving research that we know is the answer
Pen y fan, 365, 12 months of tough terrain, 4 pairs of shoes and hats and coats to keep out driving rain,
His trademark scarf, in pink and red was lost o’er the mountain edge, but found by a kind person when it landed in a hedge
Des legs and feet they were in bits and final climbs, well they were rough, but Des, he just kept going as gee whizz this man is tough!
But tough he is in body but his heart is just pure gold, a kind and humble Son & Dad and great friend we are told
A Super Hero, made of stuff you only find in Brecon, this boy has shown some spirit and its true to say I reckon
That this will go down in history, this kind & Gentleman, Des Lally, What a nice bloke – The Legend of Pen y fan.

As a memento of his achievement, Christ College Old Breconian’s Association presented Des with a canvas caricature of Des, by Oddgods. 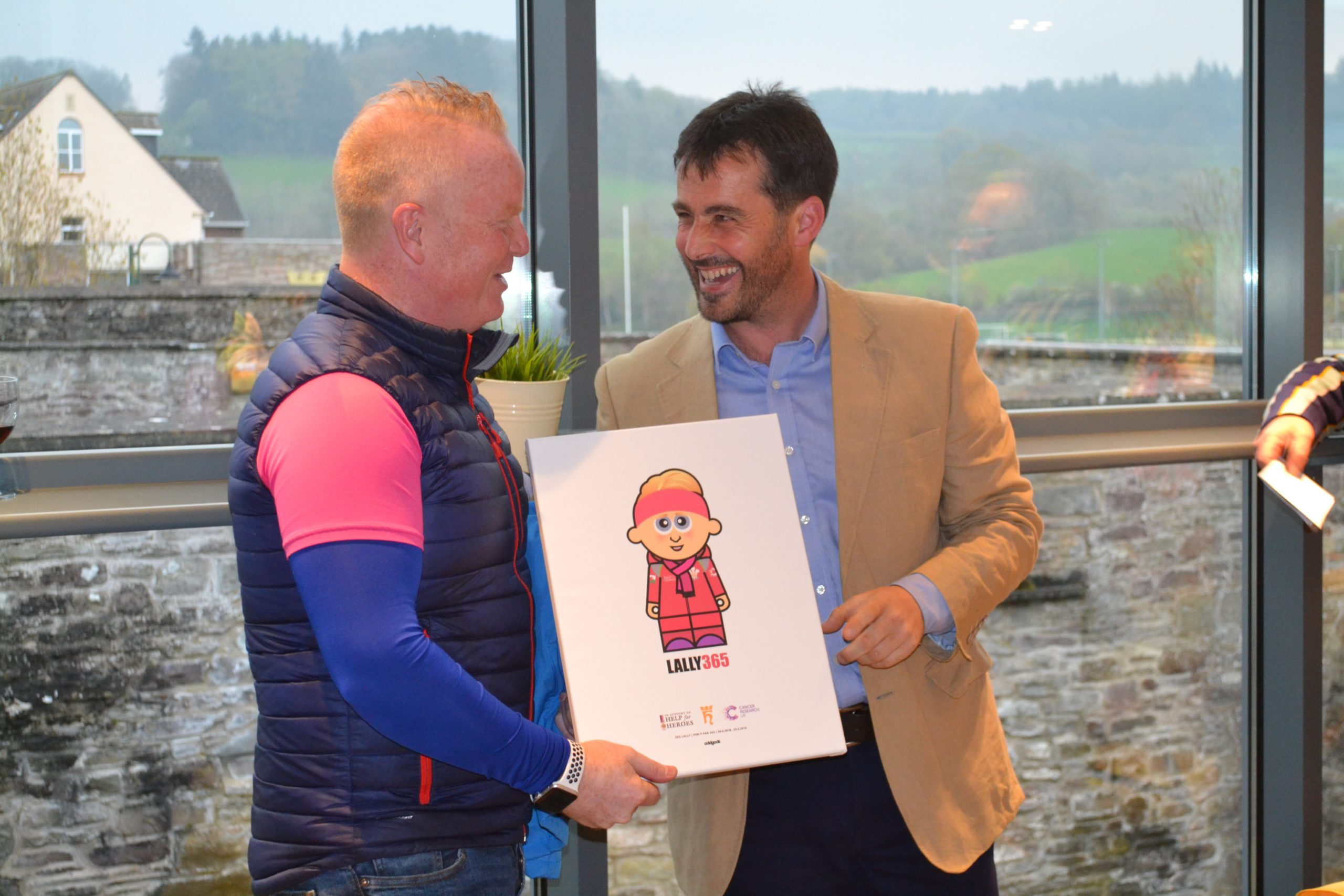